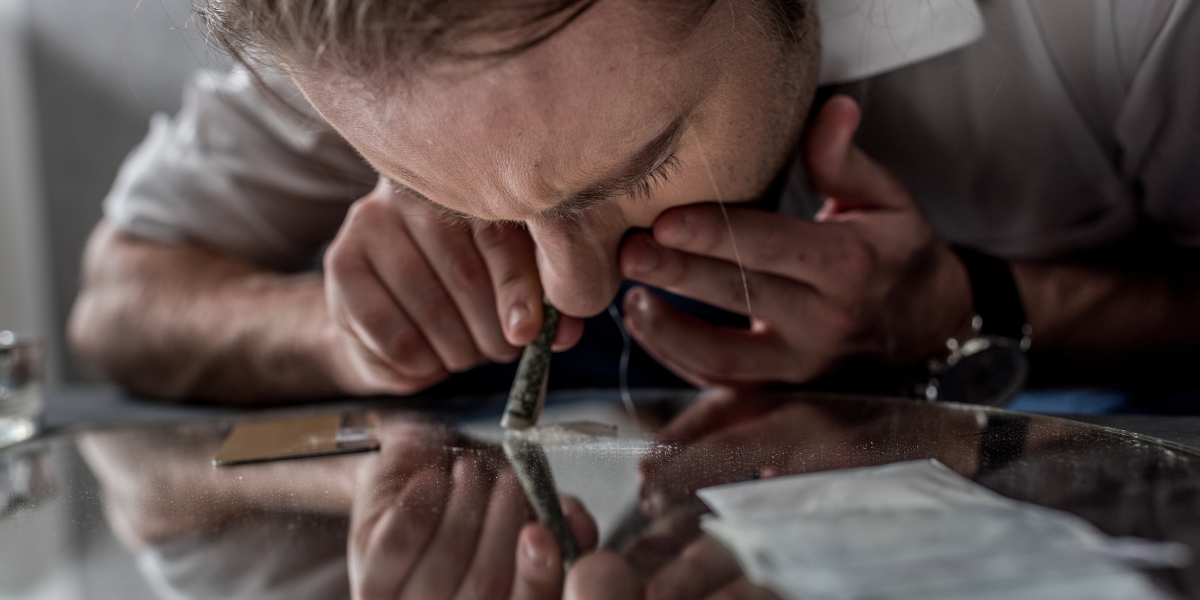 Most people who use cocaine chase the euphoria and alertness it gives them. The chemicals that cocaine interacts with to produce those feelings can also cause cocaine-induced psychosis. Psychotic episodes are the opposite of euphoric or fun and often lead to behaviors that put cocaine users and those around them at risk.

Researchers have narrowed down risk factors contributing to the likelihood of cocaine-induced psychosis, but anyone who uses cocaine is at risk just from introducing the drug into their system. Over half of cocaine users have experienced psychosis symptoms at least once. While most psychotic episodes end after several hours, they can last for weeks or months and trigger other mental illness symptoms.

Experiencing cocaine-induced psychosis can be scary and unsettling for everyone involved and is often a warning sign of escalating, long-term problems that require attention and professional treatment.

What Is Cocaine-Induced Psychosis?

Psychosis is a side effect and symptom of other underlying conditions, including substance use disorders, mental health issues, or chemical imbalances. A state of psychosis includes feelings, thoughts, and experiences that are not in line with what is occurring around them.

One of the contributing factors to psychosis is high levels of dopamine. Increased dopamine levels cause lowered impulse control and an increase in feelings of aggression and mania. Abusing cocaine floods the system with dopamine, and too much can cause psychotic symptoms or a full-blown psychotic episode. The side effects of cocaine can also trigger mental health conditions that contribute to psychosis.

Some cocaine-induced psychotic episodes last days after the drug is out of the system. However, doctors believe that the more a person experiences cocaine psychosis, the more likely it is to happen again and last longer. Some people have experienced psychosis symptoms to varying degrees for months.

Cocaine causes people to be on high alert. As psychosis sets in, they become suspicious of people around them, often thinking they are being watched or surveilled by enemies or law enforcement.

People experiencing hallucinations may see, hear, taste, smell, or feel things that do not exist in reality, but they will react to them and believe they are happening.

Delusions differ from hallucinations because they are ideas and beliefs, not physical experiences. Delusional people might believe things about themselves and their abilities or other people. Delusions can be positive, negative, or mixed.

Cocaine-induced psychosis can also cause people to experience a variety of behavioral symptoms. People experiencing a psychotic episode don’t realize what is happening and can become scared, confused, or defensive, which causes them to lash out and potentially be dangerous to themselves and others.

Other behaviors and symptoms of cocaine psychosis include:

Unlike physical side effects, cocaine psychosis symptoms won’t directly result in harm or death, but the actions they cause people to take can. If you are around someone experiencing cocaine-induced psychosis, try to remain calm and ensure your safety first; then, you can attempt to soothe and take care of the other person.

In the United States, 14% of adults admitted to using cocaine at least once. 53% of people questioned about long-term cocaine use admitted they had experienced mild to extreme cocaine-induced psychosis.

When researchers from the National Institutes of Health (NIH) further surveyed that 53%, they discovered the following:

While cocaine is a catalyst for psychosis, it is not the only contributing factor. Frequently underlying mental health conditions contribute to cocaine-induced psychosis.

It is impossible to predict who will experience cocaine-induced psychosis precisely; however, researchers have identified several risk factors that increase the likelihood. The more risk factors a person has, the more likely cocaine psychosis is to occur.

Risk factors for cocaine-induced psychosis include:

Fluctuating dopamine levels caused by cocaine can trigger or intensify the symptoms of mental health disorders. A mental illness does not guarantee that using cocaine will develop into a cocaine use disorder or cause psychosis, but it increases both chances.

Some of the most common mental disorders in people with cocaine addiction include:

Many people self-medicate mental health issues with drugs, not realizing that it leads to more problems and worsens symptoms of drug addiction and mental health disorders.

Successfully treating co-occurring disorders requires a treatment plan that tackles both disorders simultaneously but as separate things. While they may share symptoms and sometimes even causes, they require different approaches and techniques.

If you or a loved one is struggling with cocaine dependence and addiction, Northridge Addiction Treatment Center is here to provide an opportunity to reclaim your life.

From the moment you walk through our doors, we prioritize your health and recovery. Starting with your physical well-being, we offer onsite medical detox with 24-hour medical care and support. Once you are safely through withdrawal, we use dual diagnosis to get a complete picture and develop a unique and personalized treatment plan tailored to your needs.

NATC’s superior patient-to-staff ratio ensures that you receive highly personalized treatment and become equipped with the skills and knowledge to stay on the path of lasting recovery.

Contact us today. Our treatment specialists are here to help you take the first steps toward a happy, healthy life.